Basic bread making can seem a simple process - you mix flour, water, yeast and salt together, let it rest for the appropriate amount of time, and then put it into the oven. Obviously there can be many more complicated processes and techniques that lead to many different types of breads, but virtually all combine at least those 4 ingredients as a simple base. However, the chemistry involved in the bread making process is far from simple, with 100s of chemical reactions taking place at each stage.

I'm going to try and explain the basics behind bread chemistry, hopefully without getting overly technical and science-y!

Questions like: What is gluten? What makes bread rise? Where does the flavour come from? Why does bread go stale? Are all questions that are need answering, and I'm going to do so from a chemical point of view.

First, what is gluten?

A kernel of wheat is made up of three main parts, the outer bran, the inner endosperm, and the small germ, which looks like this: (1) 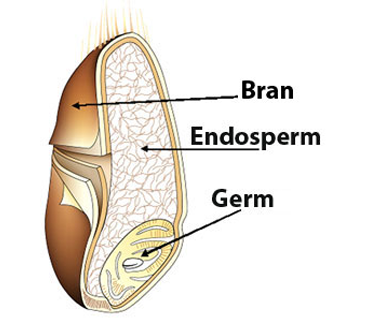 A good comparison in terms of what each of these parts consist of, is with an egg. The outer layer of bran, like an egg's shell is made up of lots of fibrous material. Although it is hard for humans to digest completely, the fibre in the bran aids the digestion process and has a lot of health benefits. Next is the endosperm, comparable to the egg white. This contains large amounts of protein and starch - all the food required for the embryo (in this case the germ, in an egg's it's the yolk) to grow. The germ contains  a lot of nutrients and fat, the same way that an egg yolk does.

In flour, there are two main, important proteins, glutenin and gliadin which form the basis of the gluten strands that give bread its structure. They are both vital in giving bread dough its elastic (ability to be stretched) and plastic (ability to hold shape) characteristics. In dry flour, these proteins are curled up at rest, and are unable to form hydrogen bonds with other proteins.

Glutenin is a hydrophilic protein, meaning that it attracted to molecular water. When water is added to flour, this attraction causes the glutenin molecules to unravel into long strands. The ends of these strands bond with each other and form a large, molecular net which is able to trap the water and gas that causes the dough to rise. The glutenin net tends to stretch like a spring, pulling back on itself when released - the dough's elastic property.

Gliadin on the other hand is a hydrophobic protein, which is repelled by water molecules. It remains tightly balled up when water is added, and acts like ball-bearings disrupting a percentage of the glutenin molecules, sliding between the ends that are trying to bond. This allows the net to be cast wider and not spring back as much, meaning more gas and water are trapped and the dough is bigger. Without gliadin, shaping dough would be almost impossible!

Gluten is made up of glutenin and gliadin and other proteins, and exists as long strands that trap the gas bubbles allowing the dough to rise. When a baker kneads dough, what he or she is doing is to try and create as many gluten strands out of the present glutenin and gliadin as possible. When the bread is baked, gluten strands coagulate, or stick together, which stabilises the shape of the end product. (2) 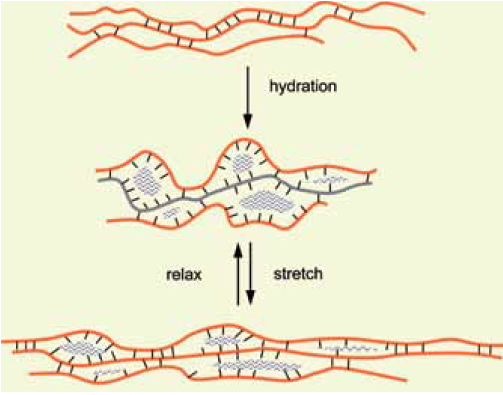 Another question often asked, is what makes bread rise?

The easy answer, is that carbon dioxide is given off by yeast in the bread and trapped by the gluten molecules. However in order for this to happen more processes have to have preceded it. Yeast feeds on simple sugars to form carbon dioxide and ethanol:

However, there isn't much glucose available in wheat flour. There is plenty of starch, and enzymes present in the endosperm that help break down the starch. Starch is effectively a big long chain of simple sugar molecules, which the enzyme amylase chops up for the yeast to feed on. This keeps the yeast well fed, and if kept at a nice warm temperature, in damp conditions, the yeast will thrive and produce large amounts of CO2, which inflates the dough.

What gives bread its flavour?

The fermentation process of glucose to carbon dioxide to ethanol isn't the only reaction taking place in the dough, there are hundreds of reactions happening on a smaller scale. The ethanol itself contributes to flavour, as well as being turned into flavour compounds called esters, via and esterification reaction:

A mixture of these esters, combined with the ethanol (before it evaporates during the baking process), give bread its flavour.

With sourdough breads, which are made without traditional bakers yeast, bacterias present in the sourdough starter produce acetic and lactic acids which give rise to the characteristic 'tang' that these breads have.

Why does bread go stale?

As most people will have inadvertently discovered, bread kept too long goes stale. This process can be slowed by adding fats to the dough. Initially the linear amylose polymers in flour – about one fifth of the total starch – are aligned, side by side, in a microcrystalline structure. This structure is destroyed during baking, but subsequently crystallisation recommences, to a crystal form which contains lots of water of hydration. This reduces the amount of ‘free’ water in the bread, and it loses ‘springiness’ and appears to dry out. Adding fats to the dough, which are hydrophobic, slows the migration of water during the crystallisation, keeping the bread moist. They also improve loaf volume and crumb softness. (3)

I can offer bespoke bread making courses for groups of up to 6 people of all bread making abilities.
For more information and to discuss a course please email:
breadfordshirebakery@gmail.com.
Parties and events
Breadfordshire Bakery can cater bread for any party or event that you might have.
So far we have catered for:
- the starter for a wedding of 250 people
- a 21st birthday party for 80 people
- a 25th wedding anniversary for 120 people
- an engagement party for 70 people